Look at the pictures and say what children are talking about on their first day at school. 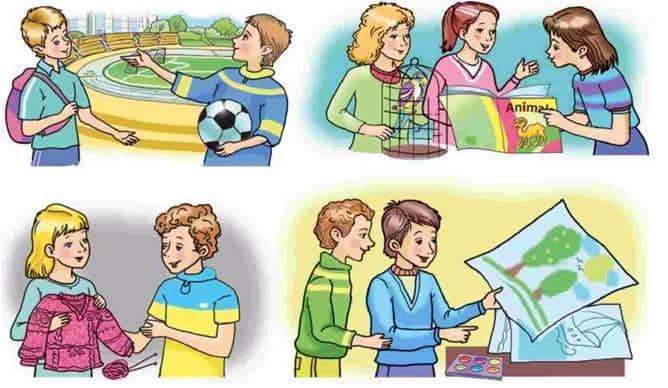 Example: I think Boris and Artem are talking about sport, football, to be exact.

Read and practise the rhythm. Say what yon think about your studies in the sixth form.

Much new to learn Fun every day!

Read and recall: there is/there are and modal verbs.

1. Look at the photo and say what there is on the desk, what children must take to school. 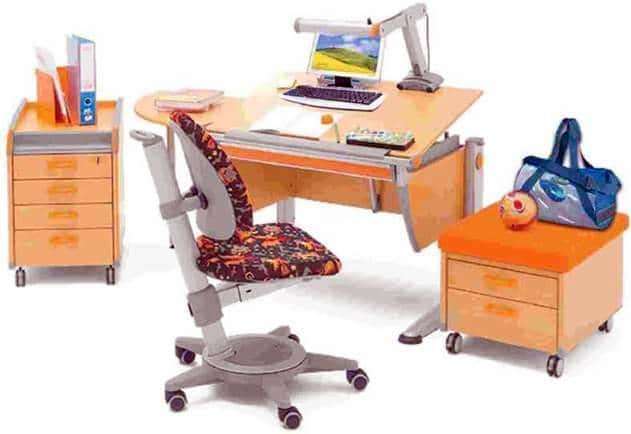 Example: There are copybooks on the table. We must take

Example: We can meet new friends in the sixth form.

We must work hard.

We may take new sport.

1. What clothes the sixth formers should/shouldn’t wear at school.

2. How the school children should/shouldn’t behave at school.

IV. Time to Listen and Read

1. Listen to / read what different children say about their studies in the sixth form. Whose ideas do you share?

Ann: I like to be a sixth former. It means I will learn more about different unknown things. There are new subjects in our new time table and there are also new teachers. I like to learn new things!

Boris: Last year the sport team of our class was a school champion.

In summer my friends and I practised a lot in our school stadium. I hope we’ll win all the football matches this year too.

Olha: During my summer holidays my granny taught me how to embroider. I’ve embroidered my blouse and a handkerchief. Now I want to learn how to knit. I have a little brother and I want to knit socks for him. Our teacher can teach me.

Helen: My friends say I’m a very sociable person and make friends easily. It’s true. I like to meet new people. As a rule there are a few new pupils in our class every year. I think we’ll make friends.

Andrew: This year I’m going to join our English-speaking club. I want to improve my English. I spent my summer in Artek and became acquainted with John Brown from Britain. I had difficulties in communicating with him. I felt ashamed when I couldn’t understand him or answer his questions I must learn English better!

Bohdan: As I’m interested in computing this year I’m going to devote more time to it. I want to learn how to make my web-site, to search the Internet at our computer technology lessons. It’s fun to find new e-pals and to communicate with them.

1. What does Ann want to do in the sixth form?

3. Why is Andrew going to join the English-speaking club?

4. Who is very sociable?

5. What does Bohdan want to learn at his computer technology lessons?

6. What does Boris plan to do in the sixth form?

3. Look at the pictures and reproduce these episodes from the texts.

1. In pairs, discuss with your friends your plans for the 6-th form as in the pattern.

A: That’s great! I know you are interested in…. Are you going… ?

2. Act as one of the children and speak about your plans for the sixth form. Use:

3. Speak about your future studies in the sixth form.

Write about a new activity you are going to take part in being a sixth former.