1. Work on your own. Listen, read and find the places on the map. 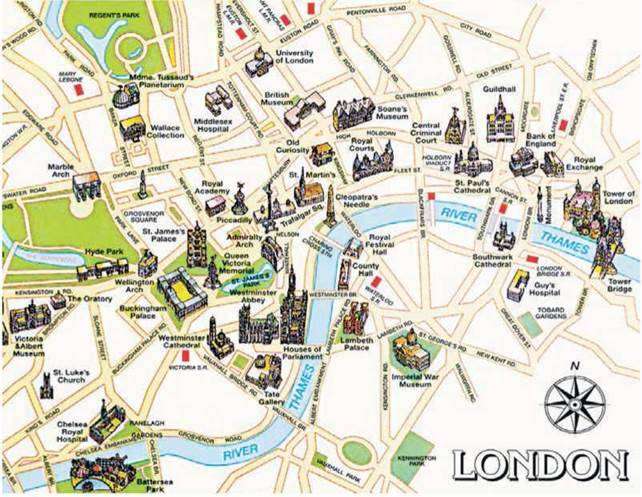 2. Work in groups. Play a game. A leader says two or three sentences about one of the places on the map. The others must guess what place it is.

A leader: This is a bridge across the Thames River. It is behind the Houses of Parliament.

3. Work in pairs. Talk with your friend about the places you would like to visit in London.

A: I think London is a fantastic city. Those who are fond of history can visit the Tower of London and Madame Tussauds Museum. Those who are interested in art can go to the National Gallery. Personally, I would like

to have a ride on the London Eye.

B: London is the city where ancient and modern live side by side.

I would like to have a boat tour along the Thames River. It is exciting!

1. It is a royal church. It is more than 900 years old. It is situated not far from the Houses of Parliament. It was founded in 1050 as a monastery, but later it was rebuilt. There are tombs of nearly all the kings and queens of Britain there. The Abbey is the symbol of English traditions. One of the treasures of the Abbey is the ancient Coronation Chair.

2. This cathedral is the most famous of all English architecture. It dates back to the 17th century. It has the second largest ring of bells in the world. Inside the cathedral you can see many monuments to generals and admirals. The cathedral is famous for its Whispering Gallery.

3. The palace is the official London residence of the Queen

and her family. Above the State Entrance is the central balcony where the Royal Family appear on occasions of national holidays. The palace is like a small town with a police station, two post offices, a hospital, two sports clubs, a cinema and a swimming pool.

5. Work in pairs. Talk about the photos. Use the information from Ex. 3.

6. Work in pairs. Take turns to ask and answer the questions about the photos. Use the prepositions: in the middle of, in front of, behind, on the left of, on the right of.

A: Where is Nelson’s Column?

B: It is in the middle of Trafalgar Square.

7. Look at the cards on page 126. Write which places of interest in London Peter is going to visit during his trip to Great Britain. Use the words: to be going to, to have fun, to visit.

On Monday he is going to take pictures in Trafalgar Square.

The Globe Theatre St. Paul’s Cathedral The Tower of London